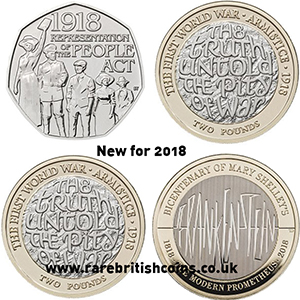 The Royal Mint has already started minting new 2018 coins to add to the large number of interesting and collectors coins already in circulation. It has some space to fill for coin collectors since changing the design of the one pound coin in 2017 as that took a lot of limited edition pound coins out of the pool of coins that might end up in your change.

So far we have the following new commemorative UK coins in circulation.  These are mainly new £2 coin designs and a new 50p design.

Follow the above links to find out more information about these coins and what they are currently selling for online. If you have found one in your change, check it out before you spend it, it might be worth more than you think. Or it might be worth its face value.

We are sure that the Royal Mint will have plenty of new ideas for exciting commemorative coins to follow. We look forward to bringing you news about them and help in working out what they are worth (over and above their face value of course).

Do NOT follow this link or you will be banned from the site!